One of the largest European manufacturers in the field of microfluidics, Elveflow, devoted a review material to on-chip automatic efficient bacteria separation and preconcentration method with the use of pressure-driven flow-controlled microfluidics developed by a team of researchers from the Bauman Moscow State Technical University and the Institute of Biochemical Physics, Russian Academy of Sciences.

During the experiments, the valves actuation and the supply of liquids to the chip occurred automatically according to a previously created algorithm in the developed homemade software package. The real-time valves control was carried out using the image capture system.

A scalable microfluidic solution for batch micro- and nanoparticle separation based on microfiltration principle and robust on-chip valve flow control was introduced. The team demonstrated a novel implementation of batch filtration method for on-chip automated separation and preconcentration of 1 mL colloid solution of E.coli bacteria cells.

The developed method allows micro- and nanoparticles separation from sub-mL liquid samples using automatic on-chip cyclic operations— at the end of each cycle, the microfluidic system gets back to the initial state and ready to separate the next sample portion.

Due to such an approach, both filtrate (nanoparticles) and retentate (bacteria) are available in the system’s output channels for subsequent processing or analysis. The great scaling potential of on-chip platforms allows several microfluidic chips with purposefully chosen filters to be sequentially connected for two or more dissimilar sized particles separation and preconcentration.

With the help of pressure-driven flow controlled microfluidics, the presented platform performs a basic yet essential operation, which makes it highly application-flexible and scalable. For more information about what the authors have achieved, please refer to the original paper published in Scientific Reports, available here. 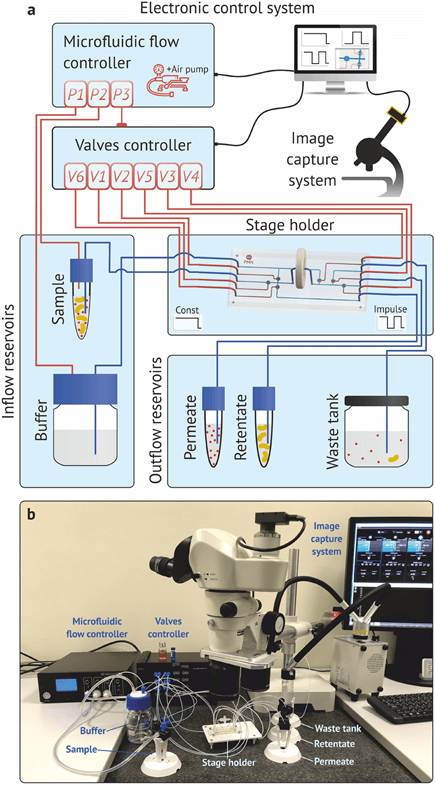 Scheme (a) and photography (b) of the experimental setup

Engineered and assembled with different microfluidic modules for sequent steps of sample preparation, chemical reactions and analyte detection, the results of this work will serve as a stepping-stone for the development of future cost-effective fully automated point-of-care devices.

For more detail refer to https://www.elveflow.com/microfluidic-reviews/microfluidics-for-cell-biology/on-chip-bacteria-separation-and-concentration/